Keen-eyed followers of this blog will be familiar with David Rohde’s fascinating account of his seven-month kidnap by the Taliban.

Originally published in Rohde’s own paper The New York Times – and simultaneously on the paper’s website – a couple of week’s ago, it made a second appearance in last week’s Sunday Times.

And now, it has turned up in The Observer (pictured). Or to be more precise, The New York Times supplement that appears in that particular Sunday paper.

The New York Times supplement is published weekly in 26 newspapers around the world (cultural imperialism, anyone?).

The articles in the British version are “selected in association with The Observer”, or so it says below the masthead. That being the case, it seems strange that nobody at Kings Place appears concerned that the paper had been scooped by one its fiercest rivals.

I wondered a week ago what the role of syndication was in the link economy and argued that it still had a place in certain circumstances. But syndication in triplicate does seem to be going a bit far.

Related:
– What’s The Future Of Syndication? 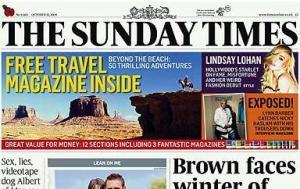 ‘Prisoner Of The Taliban‘ looked like a compelling, if slightly familiar, read. Spread across pages one, two and three yesterday’s Sunday Times News Review section, it was an American journalist’s account of his seven-month kidnap in the Afghan desert.

A quick scan to the end of David Rohde’s piece revealed all, in customary italics:

Extracted from an article that first appeared in The New York Times.

And that’s where I and, most likely, other Sunday Times readers had read the original in all its five-part glory.

Syndication is a normal part of the newspaper business, whether it’s a tabloid previewing the latest celeb photo-shoot from one of the glossies, a broadsheet recasting an essay from a highbrow monthly as op-ed, or – as here – a UK paper taking some of the best journalism from abroad.

But in the link economy, where access to the original source is only a click away, isn’t syndication increasingly redundant?

Last week, I suggested that the likes of the Associated Press were the real losers in a world where aggregation ruled. And that’s probably still the case for those whose business is predicated on providing copy for multiple sources. In other words, those businesses which conform to the most exact definition of syndication.

But for publishers there is another, softer reason to continue this content-sharing relationship besides any monetary exchange: profile.

And that, after all, is what I am doing by publishing this article here and here. Albeit on a much, much smaller scale.

So wrote Peter Preston in his weekly ‘Press and Broadcasting’ column for the Observer.

The piece by the former Guardian editor is an important contribution to the ongoing debate about the future of newspapers in an online world.

Why? Because he challenges a key assumption about success online – namely the importance of the willy-waving “I’ve got more unique users than you” position.

Taking figures from the United States (“because Nielsen collects them with continuous, detailed authority”), Preston looks at the amount of time American web users spend online in the company of newspaper websites.

And it’s not a pretty picture: the average visitor devotes just 38 minutes and 24 seconds a month on one, or more likely more than one, newspaper site.

And remember only one third of the US universe of users visits a newspaper site at all.

As Preston points out this means “the average New York Times print reader spends roughly as long with his paper a day as the average NYT net user spends online in a month”. For the record, that’s 29 minutes 57 seconds.

Preston argues that this lack of face time is a reflection of user mode when surfing – clicking through in pursuit of some fact or picture: “no brand or devotion: only utility”.

If these site visit times don’t strike you as too bad, consider how you would make money from them. In Preston’s words:

What price nine minutes and nine seconds over a month for average visiting time to the New York Post site Rupert Murdoch hopes to charge for? (Not much of a revenue stream at 19 seconds a day!)

Related:
– The Future Of Newspapers, It’s In The Bag
– The Wire’s David Simon: ‘Newspapers Must Go Behind Paywall’
– Free is just another cover price
– What if the business model for news ain’t broke?

Telegraph.co.uk is indulging in some digital nostalgia with its How 20 popular websites looked when they launched piece published this morning.

An enterprising member of the online team has raided the WayBackMachine and dug out screengrabs from big web names including Google, YouTube, Amazon, Drudge and Flickr.

The piece is doing great business on Delicious, Digg and co, although I’m sure that wasn’t the editorial driving force behind it.

There some aspects of the design and implementation that immediately date these sites. The BBC’s use of the words ‘Front Page’, for example. Presumably that’s so everybody knows they are on the, er, front page.

It’s not quite as big a 1990s sin as the Flash front-door but it’s redundant and wasteful nonetheless.

Over at the New York Times, the direct aping of the newspaper front page – masthead and all – actually holds up quite well, and although the lack of multimedia now seems odd, the use of a large image and grabby headlines stand the test of time.

Compare and contrast with the uninspired copy writing over at the 1998 BBC site.

Nevertheless, there are two print hangovers on the New York Times site that feel anachronistic.

First there’s the use of a ‘Late News Update’ strap over the air crash story – there’s no such thing on the web.

As we now know, finite space is a thing of the past. Or to borrow Clay Shirky’s phrase: ‘publish, then filter’.

Related:
– The Independent Adds Video. Why?
– What’s Wrong With This Telegraph Front Page?
– The Express Fiddles While The Mail Earns
– The Guardian, Daily Telegraph and BBC: Lessons in Crowdsourcing